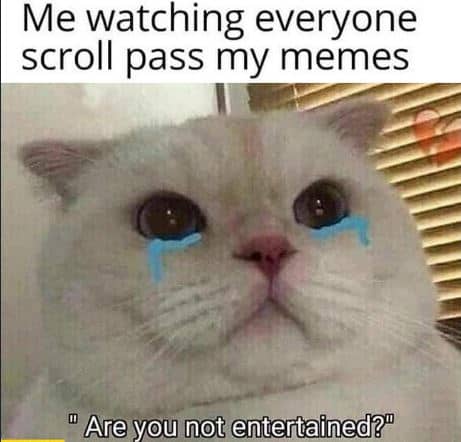 Crying Cat Meme All About:

If you are a memes lover you must have heard the name “Crying Cat meme”. It was photoshopped so well that went viral of a sudden on social media. It’s an image of a cat looking like it is crying. A glittery pair of eyes makes it all.

On June 11 of the year 2014, the “Crying Cat” meme firstly posted by an anonymous member on a Meme Generator. It was a photo of a serious cat and then it was photoshopped with human eyes on the same image. That effect made that meme so cool and eye-catchy. It looked like the cat uncomfortably serious. Later in 2014, the meme appeared on the ask.fm as it was a trend.

It was posted by the user YoussefArafat88. It just went vanished for a couple of months and wouldn’t re-appear in those days. It came to see again on April 9th in the year 2015. In pr0gramm the Germany-based imageboard was posted again. In Germany, the meme was also named “Schmuserkadser”. It became very famous in just 3 years.

It went viral throughout social media like Facebook 4chan and Reddit. The same photo but slightly photoshopped. The crystal eyes made it crying like a serious cat. So many forms of this photo were created at a time. People find it so funny and used it in many ways.

Meaning of the Meme:

On Twitter and Reddit the image gained popularity as a reaction image. And it happened in April 2020. A post on Reddit treasured over 200 points and obviously, 100% upvoted. The post was the caption “When you’re chilling with your BF and he asks if you’re good but all you can think about is how fat your thighs look when you cuddle” with the photo of thumps up the crying cat.

It’s that easy to make a meme. And the “Crying Cat” meme was also invented the same way. People liked it and I think liked it a lot that it spread across the so quickly. And even now it is a trending meme out there on social media. Though it was created in the year 2014. After six years of creation, it just increased the audience. It never lost its popularity.